Based on 4952 reviews
LOOSE LEAF TEA
sample
makes 10 cups
$2
Looking for Business pricing?
Shopping for yourself?
enjoy free shipping at adagio.com
Irish Breakfast tea in bulk available for wholesale. A combination of hearty black teas from Ceylon (Sri Lanka) and Assam (India) to get your morning off to a bright start. As its name implies, Irish Breakfast tea is an ideal accompaniment to a morning meal. It seamlessly blends the citrusy notes of a high-grown Ceylon with the malty underscore of a pungent Assam. Spicy and jammy aroma on the leaf, malty and deep flavor with a brisk and 'buzzy' mouthfeel. Rounded sweetness in the finish. May be enjoyed plain or with a splash of milk. Irish Breakfast is one of Adagio's most popular teas.
This tea contains a high level of caffeine | Steep at 212° for 3-5 minutes.

James Joyce, a gourmand as well as a prolific writer, began Ulysses with not one, but two Irish Breakfasts. His protagonist, Leopold Bloom, recounted every meal consumed on what is now known as Bloomsday. The meal, also known as Fry, is typically served all day long and consists primarily of porridge, bacon, sausage, smoked salmon, eggs and tea. The latter was required equally strong, as it was customary to dilute it with milk. The teas of Ceylon and Assam were judged equal to the task. However, the proportion of each varies greatly from blend to blend.

Part of teas of India and Sri Lanka sampler 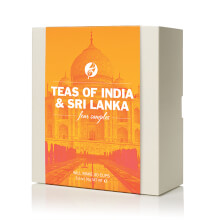