Based on 680 reviews
LOOSE LEAF TEA
sample
makes 10 cups
$3
Looking for Business pricing?
Shopping for yourself?
please consider our retail website.
Honeybush in bulk available for wholesale. Honeybush is a sibling of Rooibos, cultivated in South Africa's Eastern Cape region. Its flowers smell of honey, earning this plant a sweet name. The taste of honeybush tea is similar to that of Rooibos, though arguably a little sweeter. Like its South African sibling, Honeybush is devoid of caffeine and tannins, rendering it an ideal evening beverage.
This tea contains no caffeine | Steep at 212° for 5 minutes.

The honeybush was first cited by Etienne Pierre Ventenat in 1808, and is one of 20 members of the Fabaceae family of flowering legume plants. Honeybush has dozens of species in the wild, of which mainly several grow widely in South Africa. It’s called Heuningbos in Afrikaans, the language of the Dutch settlers in South Africa) and also known botanically as Cyclopia or Ibbetsonia, named for the physiologist, Agnes Ibetson. Its taste is more like the leaves of its cousin, rooibos or red bush, but it is sweeter and fragrant as honey which is why the English name is honeybush. 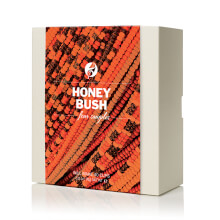 To ensure the best quality and value, we import our teas directly from the countries in which they are grown, working closely with the farmers who tender them. Our Roots Campaign connects our customers with the rich stories and the farmers behind some of our most popular teas. 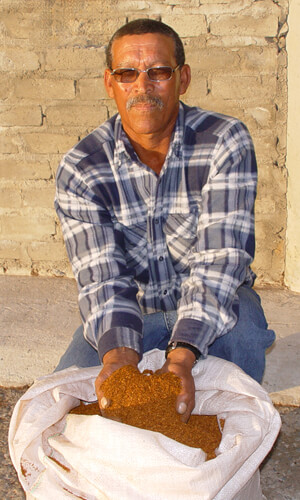 How long have you been growing tea?
“32 years. I started working as a laborer on a neighboring Rooibos Farm and for the past 14 years I have been growing Rooibos on my own farm.”
What got you started in the tea industry?
“I grew up on a Rooibos Farm. After I left home, I worked on different farms producing a wide variety of agricultural products, but my love for Rooibos and the area in which I grew up brought me back home. Since I was a small boy, I dreamed about owning my own Rooibos Farm and 14 years ago my dream came true with the help of my previous employer who helped me to loan money to purchase my own Rooibos farm.”
Can you describe a typical day out in the field? How many hours would that be?
“During Harvesting season (January - April), I leave home at 05:00 in the morning to turn the Rooibos fermentation heaps on the drying yard. I then go to the fields and start harvesting the Rooibos. At 10:00 I return to the drying yard to open the fermentation heaps and spread the Rooibos thin and evenly to dry. I then continue harvesting till we break for lunch at 12:30. After lunch (14:00) I take the harvested Rooibos to the drying yard for further processing. After cutting and bruising the tea is put into fermentation heaps around 18:00. After that we collect the dried Rooibos from the drying yard. My day ends at around 19:30. A typical working day is around 13 hours during harvesting season.”
read more >>