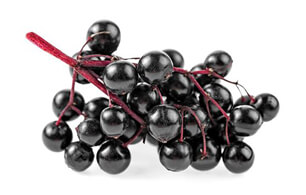 Elderberry Wine tea in bulk available for wholesale. Tart, sweet and oh, so good! Like the name suggests, our Elderberry Wine is a full-bodied, complex tisane. With notes of grape and cranberry, it is a the perfect tea to sip on to satisfy the need for bold flavor.
This tea contains no caffeine | Steep at 212° for 5 minutes.

In some myths, the elder tree is thought to ward off evil and give protection from witches, while other beliefs say that witches often congregate under the plant, especially when it is full of fruit. If an elder tree was cut down, a spirit known as the Elder Mother would be released and take her revenge. The tree could only safely be cut while chanting a rhyme to the Elder Mother.