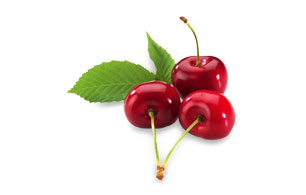 Black Cherry tea in bulk available for wholesale. This premium Ceylon tea flavored with summer cherries is treat for any Chekhov fans musing in their cherry orchard. Lovely candied cherry aroma, juicy flavor and slightly dry finish. If you've never read Chekhov, it doesn't have a happy ending. If you'd never tried our Black Cherry tea, it'll make up for it.

This tea has been reformulated from our previous Cherry tea. New recipe now available!

First grown in China 6,000 years ago, the earliest recorded commentary was in “History of Plants” by Greek author, Theophrastus, in 300 BCE. The Old Northern French word, cherise, and the Latin, cerasum, are the origins of the English word, cherry, for it was the lusty Henry VII who introduced them to Great Britain after first tasting them in Flanders. In New Netherland, a settlement in Brooklyn under Dutch rule in the early 1600s, the cherry first appeared in the U.S. and today, they’re grown in abundance in Michigan making us one of the world’s top 10 producers.